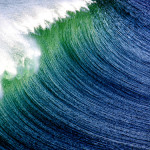 I recently read the book “Wave Rider: Leadership for High Performance in a Self-Organising World” by Harrison Owen.  Now “leadership” and “high performance” are two topics very close to my heart, so you can imagine that I found lots of great insights in this book.  However one point that really resonated with me was that some of the best leaders I’ve worked with, and in fact often when I’ve been at my best as a leader, have been in times of chaos rather than in a well-oiled system.  The truth be known, on a professional level I tend to seek out chaos – I love the challenge of bringing harmony to a team or organisation that’s dysfunctional in some way.

Think about a wave in the ocean: there are millions of molecules of water that somehow form into an organised and powerful force.  A person wanting to surf the wave needs to respect that the force is unchangeable, read the signs and decide whether to catch that wave or wait for the next.  If a surfer chooses to ride that wave, they can use their skill and experience to steer the board and hopefully ride the wave all the way into shore. Sometimes this works and sometimes they get dumped.  Hopefully they can paddle out again and have another attempt.

While I’m a huge advocate of strategic planning, I have worked with enough organisations over a period of time to know that the majority of the plan that is developed in a planning workshop doesn’t get implemented, despite everyone’s best intentions.  This is because organisations are like waves – they’re made up of many tiny pieces that interact in ways leaders cannot control.  Resources, information, technology, culture, politics, competition – so many variables yet we start out every year with a new plan to tame them! That doesn’t mean that planning is a total waste of time – it’s essential to know where you want to get to and how you see that happening – just accepting that “the map is not the territory” is extremely important.

If we accept that an organisation is a system that essentially organises itself (good things happen with or without the plan or even the leader), then leadership becomes more about riding the wave of uncertainty and steering the organisation towards overall goals and values. It’s about navigating the territory – working with and/or around the unexpected things that aren’t on the map, and doing so in a way that keep the entire organisation aligned towards it’s purpose.

This is where authentic leadership comes in.  When you’re riding the wave of uncertainty there will be issues that arise that will challenge you to the core.  The manager is unlikely to have all the right answers – a different leader may surface from within the team at different times, depending upon knowledge and interest.     Leadership therefore can be defined as passion and responsibilty – a leader is someone who cares enough to want to achieve the outcome and who takes responsibility for the required actions.  As the formal leader it is your job to protect the emerging leader – to create a space for them to work, along with others who are passionalte about that cause, towards a new and innovative solution.

Being able to let go of the traditional leadership role and embrace the power within your team will stack the odds in favour of success.  This takes great courage, and a genuine belief in the capability of others around you. But to me, that’s what leadership is all about!

The book had many more lessons for me.  However a key message was to let go of trying to control the system – accept that the system organises itself through so many factors that it’s impossible to control.  And then make sure you’re passionate about the outcome and willing to take responsiblity for what needs to be done.  Then hopefully, you will get to suf the wave all the way to the shore and bring the entire team along with you.

If you would like support to become the type of leader who can surf the wave, then click here to see our suite of coaching packages for leaders and professionals.